By Stas Levin - February 13, 2018
When I tell people how strongly I feel about my IDE preferences they are often surprised and go all "haters gonna hate" on me. Being all into empirical software engineering, here's a post on the little things that make all the difference between Eclipse and an IDE that actually puts effort into trying to understand people who write code (Java in our case).

Eclipse is a long time veteran in the IDE department, no doubt about it. It's been around forever, and is probably a synonym for 'a Java IDE ' for people who spent enough time working with it and haven't had a chance to take IntelliJ for a spin.
I believe it was circa 2012 when Eclipse started falling behind on both stability and features. I even remember posting a few times about what it was that finally made me switch to IntelliJ for good and never look back.

As fate would have it, I recently had to cross-path with Eclipse once again as part of an endeavour to develop an Eclipse plugin, no less. While interesting, the gory details of what that plugin was supposed to do are not the point of this post, instead, I will focus on the experience I had using Eclipse for roughly a month.
Being an IntelliJ enthusiast and evangelist (the kind that doesn't get paid by JetBrains) for more than a few years, the bias is true, I did however try to be as open minded as I could. I even picked up a shortcut or two!
That said, and that's a spoiler alert, my Eclipse experience was rather poor, only this time around, instead of resorting to arguments like 'Eclipse is ugly', I actually have empirical evidence to back my points (not that Eclipse is ugly though, other points).

Next time you get into one of those #what-IDE-is-better debates keep this post in mind so you can have some arguments ready. 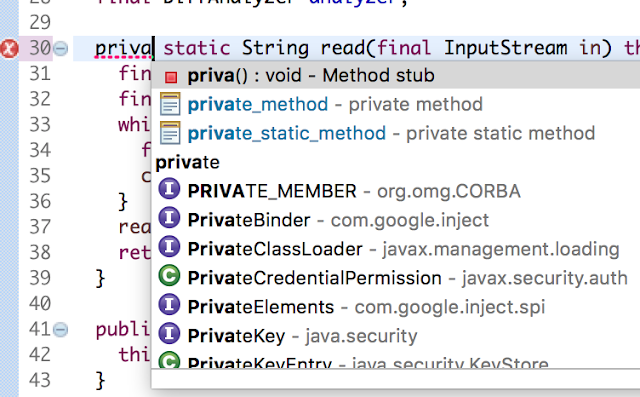 Seriously? "private" is only the 4th option?
It is because creating a stub method called "priva" looks like the most probable choice given that my caret is placed at the beginning of an almost complete method signature?

IntelliJ doesn't even give you options, it just silently completes this with "private" as if saying "sure thing man, anything else?". 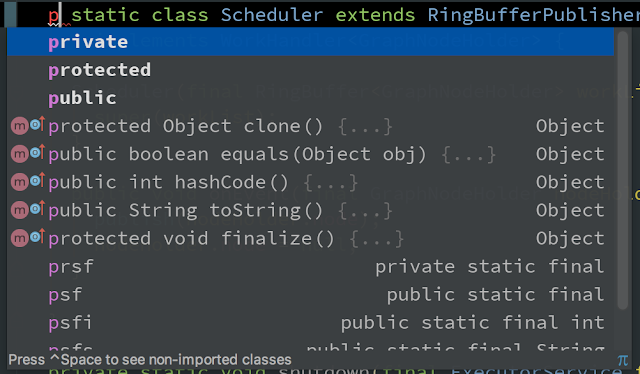 In Eclipse, navigate to class (type) requires either typing in an exact prefix. Typing in characters that appear in the middle of the type name will not get you where you wanted to go unless you use wildcards (i.e., the "*" character). Now this is just annoying. Having to type in "*Tree*" when you want to go to "SpectraTreeVisitor" is sooo 90's.

The folks at JetBrains understand that the 90's were awesome but it's time move on, and not only are you shown matching results when you type in any consecutive substring (not just the prefix) of the type's name, you can also type in the camel case letters (e.g., "TEH" for "TestEventHandler") to get the matching results.

Edit: following a comment by a keen reader (and a short experiment) Eclipse supports the camel notation in 'got to type' as well. Cool!

Same goes for the "file name" lookup, or "open resource" as Eclipse likes to call it. Another thing the smart folks at IntelliJ realized is that people often switch between looking for a type and looking for a file name, so when you have one of them open, hitting the shortcut for the other one just switches you over, which is what you would expect to happen. What you would NOT expect to happen in this case, is you having to first hit ESC, in order for the other shortcut to work. This kind of UX shenanigans was something people were used to in the early 2000's, nowadays when user experience is measured in click-distance, adding an entire click for nothing may result in users going WTF.

Let's talk about strackstraces. You know those "ResourceUtils.java:43" locations they give you, pointing to places of interest where exceptions were thrown?
Being the sophisticated AI machines that we human-beings are, it feels natural to take that "file-name.java:#lineNumber" string and paste it right into the "open file" or "open resource" search boxes. In IntelliJ this will actually bring you to the specified file and line number.
Eclipse will go "Ugh?!" right after it sees the semicolon in this string.

(The lack of) Variable inspection

In case you are not a Google employee who write perfect code even on paper, your are probably no stranger to debugging. As part of debugging, people often wish to see what certain variables hold. In Eclipse this is called "inspect", and if you ever get it to work - tell me how.
There seems to be a bug that prevents this dialog from showing in Eclipse Oxygen and every time an attempt is made, it shows for a second and disappears. Inspecting variables is debugging 101 so I'm not sure how an IDE can afford dropping the ball on something that important.

Conditional breakpoints are a great thing to have in your debugging toolbox, state a boolean expression and whenever it evaluates to true the breakpoint will be triggered. These boolean conditions can sometimes be tricky to get right and when you do it's a satisfying feeling. Which in Eclipse will not last long, since upon changing code that may very well be unrelated to your breakpoint, your breakpoint simply disappears. Not disabled, not invalid - gone. Experiencing your beloved breakpoint disappear after all the hard work you'd put into it is very disappointing.
Speaking of click-distance, before you can enter a condition expression you have to mark a checkbox that says "Conditional". 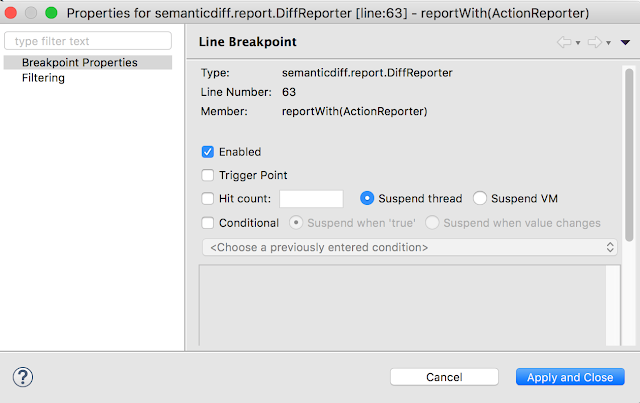 Step into my method

Sometime method calls are chained and you have a statement of the form "a.foo().bar();". At some point IDEs realized that it can be a good idea to let you step into "bar()" without making you first go through "foo()".

Eclipse has this feature too and it's called "step into selection". When I tried to use it the debugger hanged in a state described as "stepping":

One of the things I like about IntelliJ is that shortcuts are kept consistent across different menus and contexts. For example, cmd + N means 'create new'. When you are in the editor this shortcut will suggest creating new methods, when you are in the project explorer view it will suggest creating new files and packages, etc'.
Running unit tests (ctrl+shift+R) will work both from the code editor and from the project explorer view when you select a test class or a package that has test classes.

I really missed that consistency in Eclipse, where the whole approach to the shortcut theme is quite different.

People who play the piano might not understand why I'm making such a fuss about it, but for me hitting alt+cmd+x+t using one hand is quite the challenge, and I'm not really game with a two hand shortcut for something as common as running unit tests. Ok, so change the binding one might think to himself.
Enter the key binding menu, let's search for "run test".... hmm - nothing.

ok, just type "run Junit test" and do it slooowly.

Turns out the approach that was chosen here is the opposite of consistent, and you can configure shortcuts for actions performed in different contexts. While I'm not a big fan of this, I guess I can understand the rational behind it.
What I cannot understand is how did anyone at Eclipse think that showing this to users is the way to go: 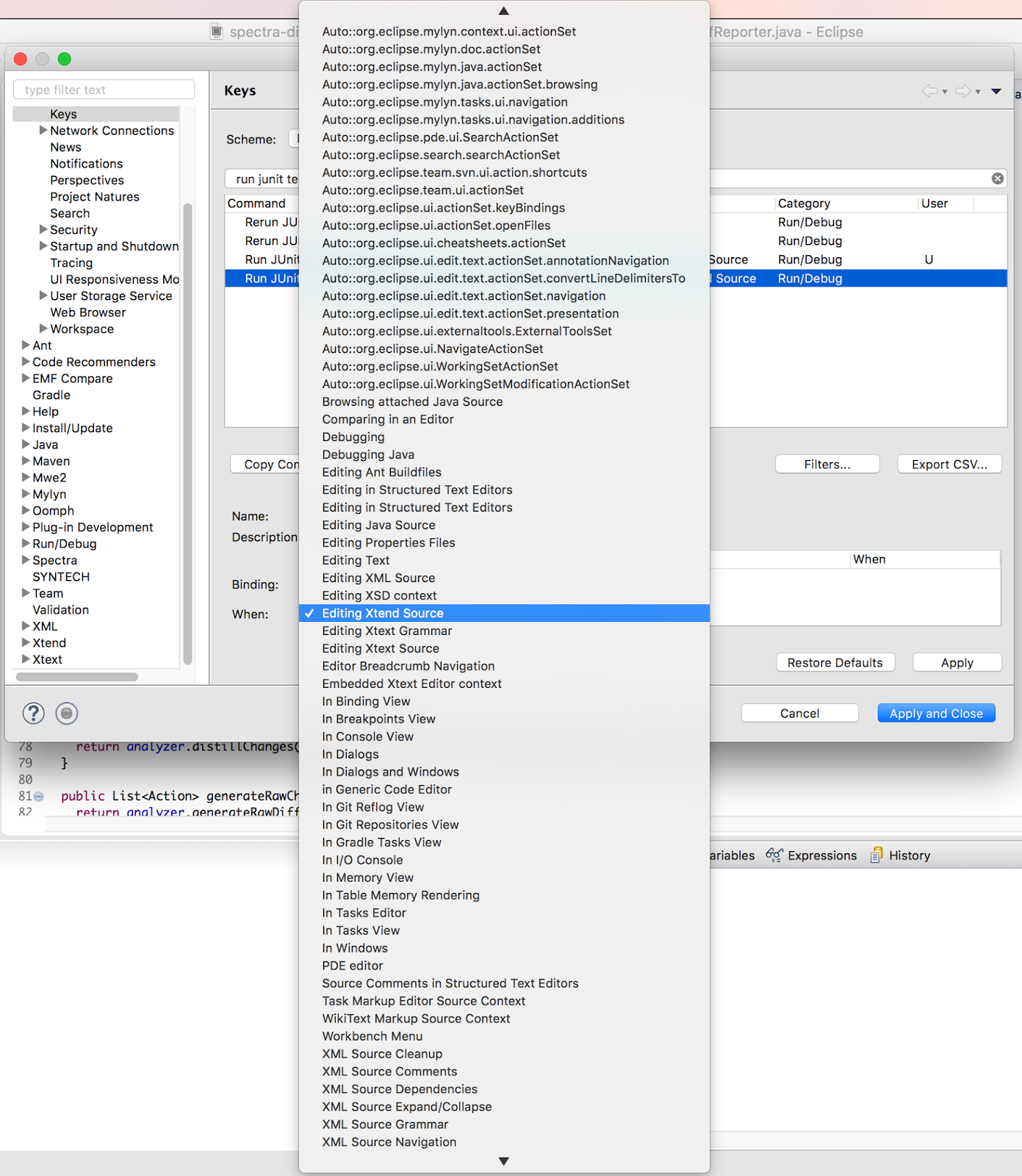 If you don't like the current key binding just change it, yeah and also feel free to specify what context this binding will be active in, out of these gazillion options.  Smooth.

I feel pretty comfortable dropping the IMHO and saying IntelliJ is by far the leading IDE for Java at the moment.
Cynicism aside, I have a lot of respect for Eclipse as an institution, but as an IDE it has a lot of catching up to do. Seriously.
IDEs

By Stas Levin - February 22, 2013
I'm not sure if it's the particular laptop model (Lenovo W530) or the particular Ubuntu version (12.04 LTS) or perhaps the fact I'm a complete and utter Linux newbie, but getting this show on the road has been quite a bumpy ride, to say the least (just shoot me would probably describe it more accurately, all I wanted was to set up a dual monitor environment).
Read more

By Stas Levin - October 24, 2012
There is no easy way to say it, the default Jenkins plugin for publishing MSTEST results does not show a unit test's standard output when it fails .
Read more